Wonder what this was about?

The future of the Marvel Cinematic Universe looks to be underway as of this week, following a secret meeting between several prominent Marvel directors. Guardians of the Galaxy director James Gunn shared a photo of himself holding a big Infinity Gauntlet mug with the caption, “Caffeine Power Up Meeting With #Marvel Directors Today.” Gunn shared the photo in his Instagram story today, mentioning the meeting with Marvel directors. 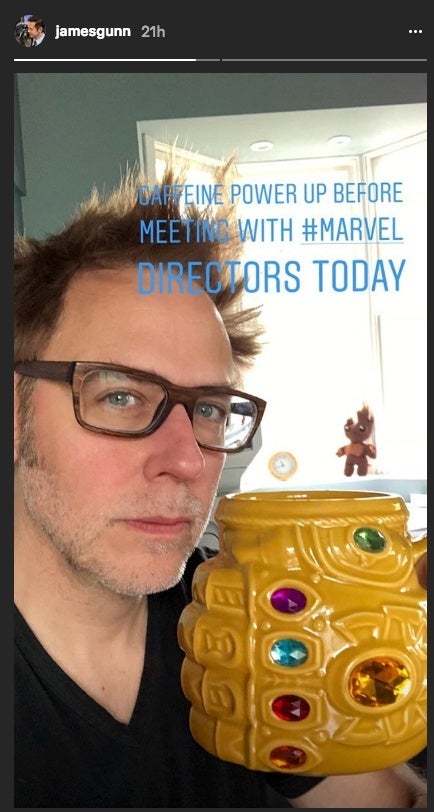 With the final three films in Marvel’s Phase 3 upon us, these directors are presumably getting together to discuss the future of the franchise and where it’s headed. Gunn hinted towards this on Twitter later on in the day during one of his Q&A sessions. ET reporter and host Ash Crossan asked him a simple and light-hearted question, “Who’s the best person you saw today.” Gunn replied, “You or Ryan Coogler.”

You or Ryan Coogler. Okay now next question respond to this one.

While Coogler was already rumored to be directing a sequel to Black Panther with things being worked out behind the scenes, this meeting all but confirms his commitment to the franchise.

Gunn confirmed Ryan Coogler and the Russos were among the attendees. Gunn mentioned that he loves the two filmmakers and that he was with them just before he began answering questions.

I love them. I was just with them minutes before starting this chain.

The Russo Brothers’ presence is especially helpful for the future of Marvel movies.

Gunn also confirmed that Avengers 4 was at least one of the topics discussed and acknowledged in the secret meeting. However, he did not give out any details.

We talked about a lot of things, but yes of course that was one of them.