The Third Murder Review: Our Criminal Justice System Is A Farce

The Third Murder makes us question if the death penalty is really necessary.

“The Third Murder” is an arthouse film that is not so much about murder but about the criminal justice system and its many flaws. It’s also about the death penalty.  In Japan, calls to abolish the death penalty grow louder by the day, but Prime Minister Shinzo Abe seems unmoved. It’s blatantly obvious which side of the fence Koreeda has set up camp.

You see, the criminal justice system isn’t necessarily about ‘truth’ — if it is, O.J. Simpson would be serving a life sentence in prison right now or perhaps even been sentenced to death. No. Court proceedings are debate competitions, where lawyers are given a stage in which they twist and turn facts to suit the narrative. Defendants are prepped in advance. They’re told to dress a certain way and told what to say and more importantly, what not to say. They’re also taught to look and behave a certain way — shed a tear if they have to. It’s all bullshit. 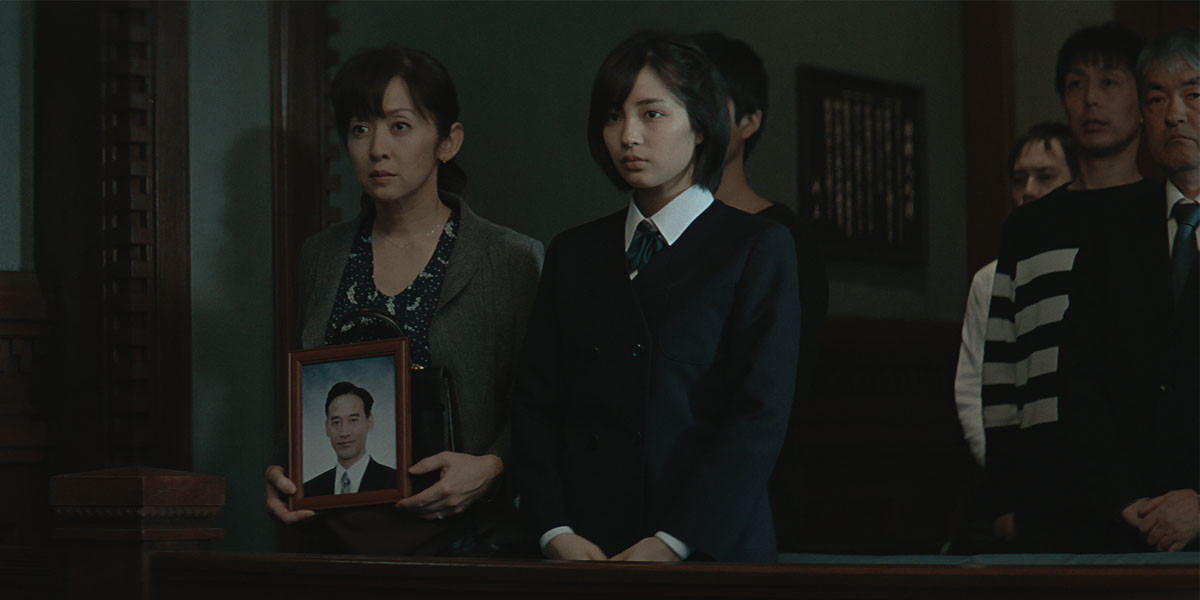 And to be able to confidently say that someone should be sent to the gallows based on bullshit stories spewed by imperfect men is cruel, a violation of human rights and frankly, quite silly. Sure, that may be a cynical way of looking at one of the more important foundations of our society. After all, many people do in fact deserve to have their lives taken away from them. But that’s not the point Koreeda is trying to make. The question isn’t whether or not person X or person Y deserves to die, but rather should we have the power to take someone’s life away in a system that isn’t foolproof.

“The Third Murder” opens with a man, Misumi (Kôji Yakusho) brutally bludgeoning someone to death with a wrench, before stealing his wallet and burning his body. At first, we assume what we’re seeing are actual events, but soon learn that it isn’t. It is merely the current narrative. You see, Misumi has confessed his crimes. His team of lawyers, led by Shigemori (Masaharu Fukuyama) immediately try to switch the narrative from ‘robbery and murder’ to ‘murder and theft’. That alone would supposedly lessen the sentence on Misumi. Seriously, the system is a farce. As the story continues to unfold, the narrative keeps changing. In an interview with a local tabloid magazine, Misumi mentioned that he was in cahoots with the victim’s wife — did Misumi and the victim’s wife have an extramarital affair? We later learn that the victim’s daughter has been buddies with Misumi for a while now. She says that Misumi killed her father after learning that her father raped her multiple times. She’s grateful towards Misumi. Misumi says the girl is lying. But why would she be lying? And why would Misumi deny it? So what’s the truth?

That is the picture that “The Third Murder” paints. Humans are flawed, emotionally driven creatures with brittle memories and a knack for distorting information. In situations in which concrete evidence is absent, how can we send a man to the gallows, even if we get a confession? How can we end a man’s life without knowing the truth in absolute? We shouldn’t.

Director Koreeda’s visual strategy is commendable. “The Third Murder” is an arthouse film and naturally it emits that sorta vibe. There are plenty of scenes that have no music. We hear the shuffling of files, the crumple of papers and footsteps. This adds a sense of realism. The film lacks urgency. Usually, that would suck; here it works (for some people it sucks nonetheless — a number of people were snoring in my cinema). I would imagine that is how it is in the real world, too. Murder case or not, it’s just another day at work for these guys.

One of the best aspects of the film is the sequences that take place in the prison’s visitors chamber. At the start, Koreeda frames these shots in a way that separates the lawyers and Misumi. The ‘bad guy’ is inside; the ‘good guys’ are out. At the end of the film, the lines are blurred. Koreeda films Misumi and Shigemori from the side. Both are seen as equals. The glass that separates them seems invisible. Perhaps sometimes, we’re not so different from the people who are on the other end of the spectrum.

It is a bummer that Koreeda’s writing isn’t as riveting as his technical vision. At times the movie seems to be heading nowhere. In between each interesting lie, is emptiness. There is no back and forth. We’re only shown one side of the argument: The death penalty is bad. There is no debate, something that is absolutely essential in a film of this nature.

I recently rewatched the 1957 classic, “12 Angry Men”. It is a great film where 12 members of the jury debate and argue with one another, passionately and angrily on whether or not a man is guilty. I believed he isn’t guilty but many members of the jury do a good job in making me question my train of thought.

The screenplay of “12 Angry Men” is tight and engrossing; here it fails to keep you on the edge of your seats. “The Third Murder” is a puzzle. One with many questions and no answers. And that’s cool. The problem is, the puzzle isn’t challenging enough. And it sure as hell could’ve been slightly more entertaining.

The Third Murder is a puzzle. One with many questions and no answers. And that's cool. The problem is, the puzzle isn't challenging enough. And it sure as hell could've been slightly more entertaining.

The Third Murder Review: Our Criminal Justice System Is A Farce