Den Of Thieves Review: Thrilling And Absolutely Nothing Like London Has Fallen

This is not a January crap show.

This will go down as one of the more pleasant surprises of the year. Den of Thieves is written by the man (Christian Gudegast) who wrote a number of modern-day action masterpieces, like A Man Apart, starring Vin Diesel and London Has Fallen starring Gerard Butler. Wait, did I say masterpieces? Must be the alcohol talking. I meant disposable donkey shit.

Gerard Butler stars in this too and will mark Gudegast’s directorial debut. Gudegast, who I now owe an apology to. I woke up this morning and mentally prepared myself for what could have (or should have) been a January shit show. I thought I was going to get a Gerard Butler movie.

Gerard Butler Movie
Ge.rard But.ler muːvi
adjective informal
A movie with a plot thinner than a pornstar’s thong, one-note characters and in and around that, mind-numbing action sequences, which has Gerard Butler acting like a 2 dollar store version of Rambo. In other words… disposable donkey shit. 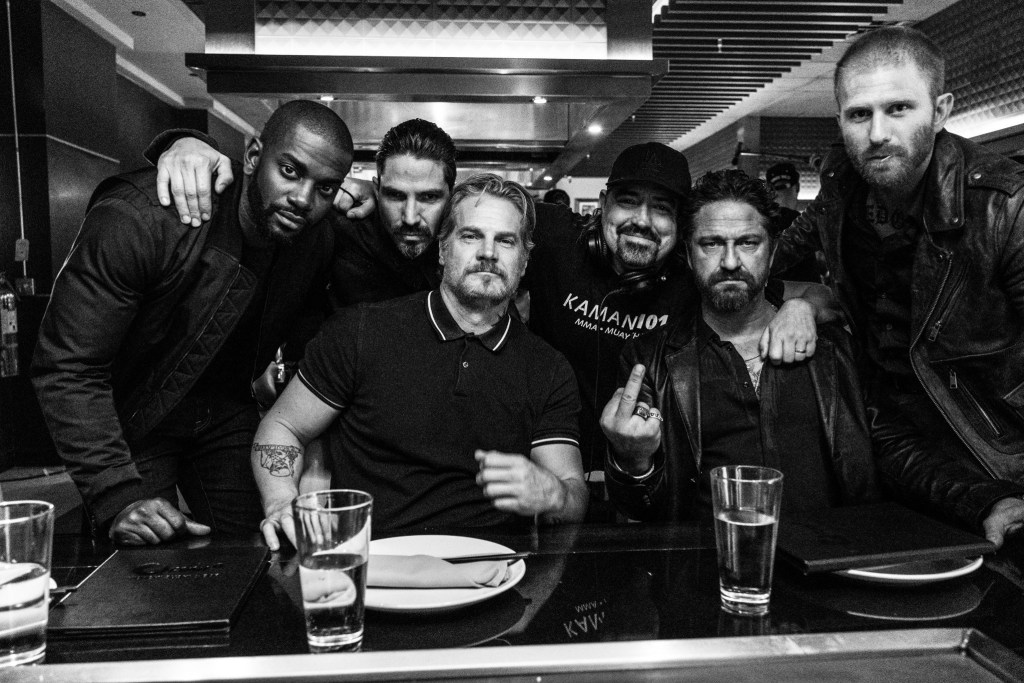 I thought wrong. What I got was a movie with actual thought put into it. One where Gerard Butler actually embodies a living, breathing character. It is a welcome surprise. Den of Thieves opens with a robbery outside a doughnut shop. Things don’t according to plan and the robbers turn into cop killers. The cop-killing robbers are planning a major heist worth $US 30 million. This is where officer Nick Flanagan (Gerard Butler) and his team come in.

There, Hobbs (Dwayne Johnson) is a straight-laced American treasure. Here, Flanagan is a mess of an individual. He’s the imperfect hero and that makes him that much more relatable. I tip my hat off to Gudegast who actually takes the time to explore this character. He isn’t in a rush to get to the next action scene. In fact, there aren’t many action scenes here, but when they do come, they’re delicious treats.

Flanagan is an asshole. When he first arrives at the crime scene, he picks up one of the dead cop’s doughnut from inside its bloodstained box and eats it, before throwing it away within the vicinity of the crime scene itself. He ‘technically’ contaminates the crime scene, but he frankly doesn’t give a shit. He’s a chain smoker and a possible alcoholic, with anger issues to match his overall crappy attitude. He’s more gangster than cop. One who would kidnap a suspect and punch their teeth out for information. Rules? F**k the rules.

But he isn’t just that. We know this because we see the respect his team has towards him. And no, it isn’t fear. It’s respect. They look up to him. There is a sense of brotherhood amongst them. Compadres through and through. We also see how he is with his family. He isn’t the best husband, but he never raises his hand, nor his voice — you expect him to raise both. When he’s with his daughters, he’s a completely different person: a loving father, warm, kind and soft-spoken. Flanagan is a smart man. He’s great at his job. He’s the kind of person that would have gotten a massive promotion ages ago if it weren’t for his shitbag attitude. Gerard Butler brings the right amount of charisma and douchebaggery to make this character work.

It’s unfortunate, that the supporting characters aren’t well developed, particularly the gang of robbers. But the actors do a decent enough job to make you care about them. Ice Cube’s son O’Shea Jackson Jr. is in this movie, as a bartender named Donnie. He’s part of the gang that Flanagan is trying to bust. But Donnie is no cop killer. He’s a badass driver that just stumbles into all this. We also have 50 Cent, and Pablo Schreiber, who’s the leader of the gang.

This movie is competently directed, especially considering its Christian Gudegast’s debut in the captain’s chair. The smaller character moments are handled well. They offer some of the best moments in the film. But when the action scenes happen, they keep you on the edge of your seats. The heist sequence is lengthy but never boring. As it slowly plays out, you start to root for the bad guys, because you want to see the whole thing play out. The cops and the robbers try to one-up each other, not by brute strength or firearms, but by their wits. Like I said, surprising.

The climax of this movie doesn’t involve a giant vault being dragged around the city as buildings crumble (this isn’t necessarily a jab at “Fast Five”, a movie that I enjoyed very much), but, an exciting shootout between our imperfect heroes and flawed villains.

January has been kind to us this year… so far. I figured both “Insidious: The Last Key” and “The Commuter” would most likely shit the bed. Neither do. You can add Den of Thieves to the mix. This isn’t a groundbreaking movie. But I walked in expecting a complete Gerard Butler ejaculation in the vein of “London Has Fallen” and got a solid crime-action-drama, instead. That, buddy, is a win.

This isn't a groundbreaking movie. But I walked in expecting a complete Gerard Butler ejaculation in the vein of London Has Fallen and got a solid crime-action-drama, instead. That, buddy, is a win.

Den Of Thieves Review: Thrilling And Absolutely Nothing Like London Has Fallen