This will go down as one of the great performances of the decade.

Last year, Christopher Nolan helmed his 10th feature film titled Dunkirk. Dunkirk, a movie that I very much enjoyed the first time watching, is a breathtaking cinematic experience, shot to perfection by cinematographer Hoyte van Hoytema with IMAX and 65mm film cameras. The film is gorgeous and mighty riveting.

It is also a movie that I found myself liking slightly less and less upon repeat viewings. This isn’t the fault of the movie or Nolan, just a matter of personal taste. I tend to gravitate more towards films that explore its characters in depth, and that is exactly what Darkest Hour offers. 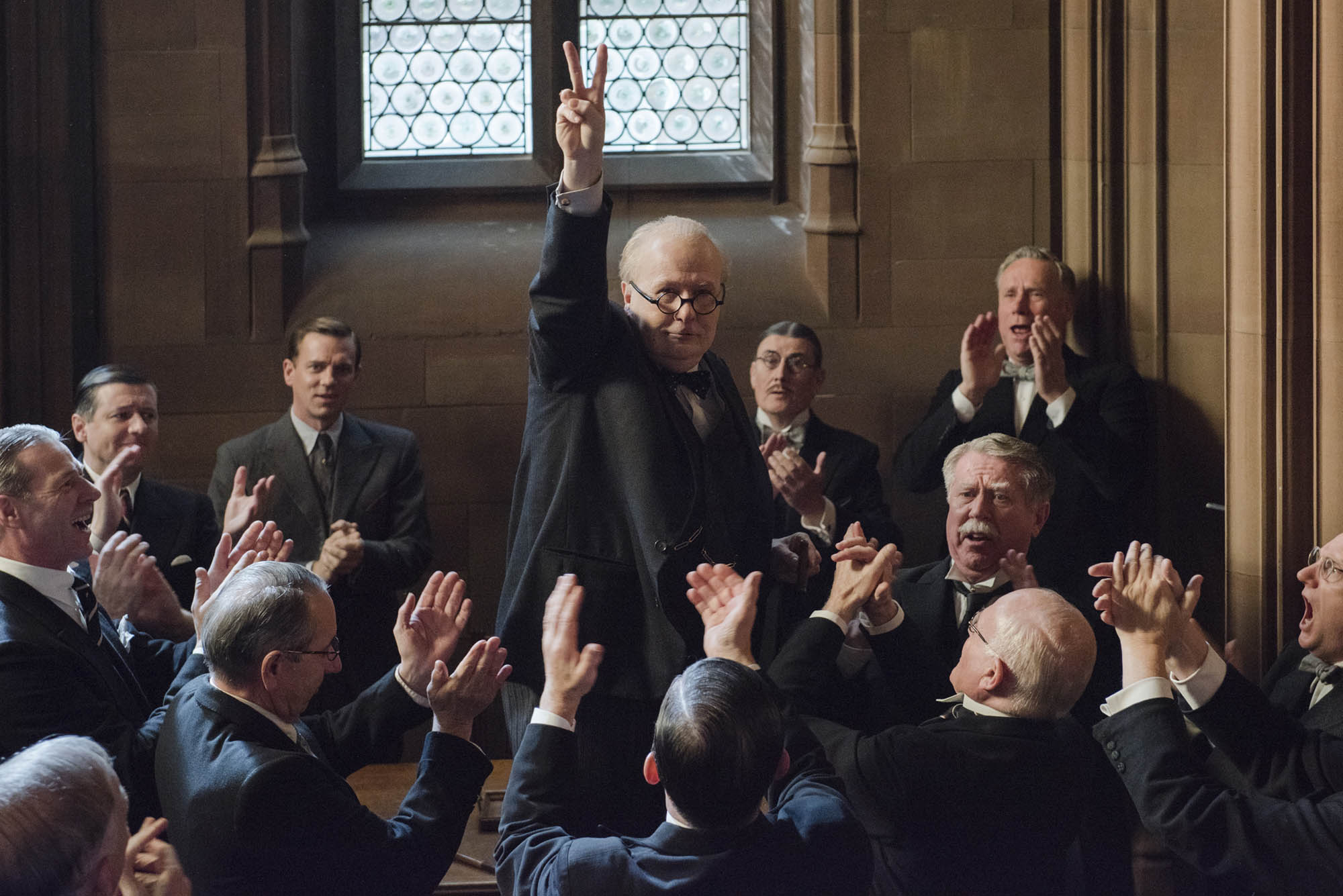 Just like Dunkirk, Darkest Hour is also a film that takes place during World War II, where 300 000 British soldiers and their allies, mainly the French, were trapped on Dunkirk, France, by Nazi assholes. What makes Darkest Hour an authentic war film is the way it avoids guns, bombs, violence, or any action sequences for that matter. In fact, we only learn about the civilian boats successfully rescuing the soldiers, through texts that appear before the end credits roll.

This isn’t a movie about chess pieces, but chess players. We don’t see heroics, violence, and bloodshed on the battlefield — we merely hear people talking about it. What we do see are angry men, plotting and scheming and debating and arguing about what the next move should be. At the centre of this, is Winston Churchill, who just got appointed as the Prime Minister of Britain.

More often than not, screenwriters are hailed for their ability to pen dialogue. But what’s usually understated, is a screenwriter’s ability to write characters. Here, Anthony McCarten, who previously received a nod from The Academy for his work on “Theory of Everything”, is giving it his all. I’m not a fan of “Theory of Everything”. I am a big fan of his writing here.

He wrote Winston Churchill with such precise detail that I left the cinema feeling like Churchill has been my best friend for the past 20 years. Churchill isn’t written as a one-dimensional Godsend, but a flawed, mostly dickish man, which is great, considering the kind of person he was in real life. Churchill is a curious case. It is said that when Barack Obama became president, he returned a sculpture of Churchill that was in the Oval Office to Britain. Perhaps it’s because the former US president’s Kenyan grandfather, Hussein Onyango Obama, was imprisoned and tortured for resisting Churchill’s empire. Churchill also once said, “I hate Indians. They’re beastly people with a beastly religion.” Many may not know, but the man who led Britain through her finest hour was also a racist prick.

Darkest Hour doesn’t cover this aspect of Churchill and it doesn’t need to, considering that the film is only set across the crucial first couple of months of Churchill’s days as Prime Minister. But it does paint a grey picture. I’m reminded of a quote from The Dark Knight Rises. Referring to Commissioner Gordon (also played by Gary Oldman), one of the cops says: “He’s a war hero. This is peacetime.”

Unlike Commissioner Gordon, Churchill was legitimately a war hero incapable and uninterested in peace. ‘Negotiation’ and ‘compromise’ are words that did not exist in his dictionary. Churchill was a highly intelligent man who wanted to fight, destroy and win, regardless if it meant sacrificing the lives of the innocent. He just so happened to play for the good guys. It’s exactly this attitude — his lack of empathy and emotion — that brought success to the United Kingdom during World War II. It’s that very same attitude that got him voted out of office once the war concluded.

Churchill wasn’t a well-liked man back then. The film does a good job in highlighting that. Wherever he went, murmurs would follow, behind his back of course. The man was a drunk — champagne for breakfast lunch and dinner — and a chain smoker. He wasn’t exactly a family man either, choosing to spend most of his time buried in his books and in his work, his wife, and kids nothing but an afterthought. But like a lot of great leaders not named Donald Trump, the man was a wordsmith, with an unparalleled ability to string together words like Shakespeare and deliver rousing speeches. 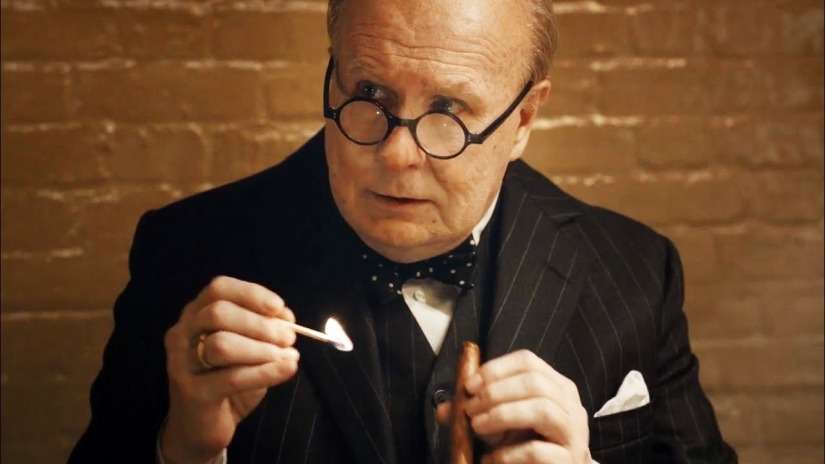 Gary Oldman’s performance as Winston Churchill is chilling. There is no way in hell he doesn’t win an Oscar for his work here. Heck, maybe they should disqualify him as this isn’t a performance. This is a work of a chameleon. Oldman isn’t doing Winston Churchill impersonations. He isn’t acting. He’s just being. It’s absolutely magnificent to behold.

I know, Gary Oldman always brings his A game, even in movies that are bad. See, “The Space Between Us”. But this will go down as one of the great performances of the decade, maybe even of all time. Here, he’s comparable to Daniel Day-Lewis’ in “Lincoln”.

It’s easy to point your fingers at the prosthetics. Yes, the makeup department did a fantastic job. Oldman has said that he would spend more than three hours every morning with the makeup artists, getting ready. But regardless of how great the prosthetics are, if Gary Oldman wasn’t on top of his game, the movie would’ve fallen apart.

This is a film that rests firmly on the shoulders of Oldman’s performance. And good God did the man deliver the best performance of his career. I believed every cough, every twitch, every sip of alcohol, every puff of cigar. And when it came to delivering Churchill’s speeches, Gary Oldman’s charisma, confidence and oratory talents sent shivers down my spine.

I have been so absorbed, talking about the exceptional writing and transformative performance that I almost forgot to talk about Darkest Hour as an entertainment vehicle, which it is by the way. This is a f**king engrossing picture. One that had me hooked from start to end. After the movie, the peeps working at United International Pictures (the distributor) asked me if I found the movie to be lengthy. I told them I could have sat through another hour. I wasn’t kidding.

Many will say that minus Oldman’s performance, the movie is just mediocre. I find that to be an interesting argument — this is a performance clinic for sure. But it isn’t just that. What a comeback this is for director Joe Wright, who previously helmed the shitstorm that is “Pan”. Here, he’s meticulous. He keeps his frames tight, as most of the scenes take place in various claustrophobic rooms and underground bunkers. This keeps the tension high, even when it’s just scenes of people talking.

He also does a good job bringing the best out of all his actors, not just Gary Oldman. The likes of Lily James, Ben Mendelsohn, and Stephen Dillane give it their all. I do wonder, though, what this film would have looked like had it been helmed by David Fincher or Sidney Lumet. Would it have been greater? Then again, I wonder the same thing coming out of almost every movie.

“Pan” made me speculate if it was the beginning of the end for Joe Wright, who started his career so promisingly with films like Pride and Prejudice and Atonement. Darkest Hour is a middle finger up my ass. Pan was just a stumble. Joe Wright is up on his feet again, running at full speed and I damn hell can’t wait for Stoner.

Gary Oldman’s performance as Winston Churchill is chilling. This isn’t a performance, but a work of a chameleon.