With some surprisingly fun moments.

Paul Kersey (Bruce Willis) is a prominent surgeon and family man. He watches his soon-off-to-college daughter at her football games, supports her dreams, and encourages his wife to get her Ph.D. He has a couple of expensive watches and every now and then has to skip out on family dinner to save lives at the hospital. One day a bunch of thugs break into his house and in a robbery gone wrong, his daughter ends up in a coma and his wife, 6 feet under. The distraught everyman gets a gun and goes on a vigilante justice spree.

No shit. That’s the plot of a bazillion other movies of this genre (if you can call it that). Mind you, bazillion is a tame estimate. What’s ludicrous is the fact that Death Wish is a remake of the Charles Bronson movie of the same name that arguably kick-started this ‘genre’ in the first place. Studios greenlit this movie for one reason and one reason alone: To reach into our pockets and grab our cash while laughing in our faces and stuffing their middle fingers up our butthole.

But there is still enjoyment to be had in Death Wish, mainly in the form of director Eli Roth’s ridiculous sensibilities. In one scene, Bruce Willis pulls a jack from under a car, using a chain. The car falls flat on a dude’s face and turns it into pulp. I could’ve sworn I saw brain matter splatter in all its magnificent violent glory. In another scene, a man is pushed from the top of a staircase and JESUS I DID NOT KNOW A HUMAN NECK CAN SNAP THAT WAY.

This movie isn’t just glorious violence. It tries to do more — though in retrospect, it should have just stuck to blood and ridiculousness. The first 30 minutes or so is all build up and character development. Eli Roth tries. Bruce Willis doesn’t try with him. Here’s a man who simply doesn’t give a shit anymore. Not one bit.

Take John Wick for instance. Besides the stylised, slick action sequences, the film works because we feel John’s pain and agony when his dog died. Keanu Reeves delivers a layered performance in which we feel his anguish and tragic passion creeping underneath his skin. He holds it in, but with every pull of the trigger, every punch he lays, you feel it and you root for him.

Death Wish is a performance clinic. The subject matter: Phoning it in. For this movie to truly work, we need to feel Bruce Willis’ grief. We don’t. He just has a blank poker face throughout the movie. He tells his therapist he can’t sleep, but we don’t see him lying in bed fighting insomnia. Later, killing becomes a drug, but we don’t sense his bloodlust. Death Wish is on autopilot throughout.

It’s not that Willis isn’t capable. We’ve seen him give nuanced, subdued performances in films like The Sixth Sense and Unbreakable. The man can act. These days, he just prefers to waltz on set, grab his paycheck and get out. 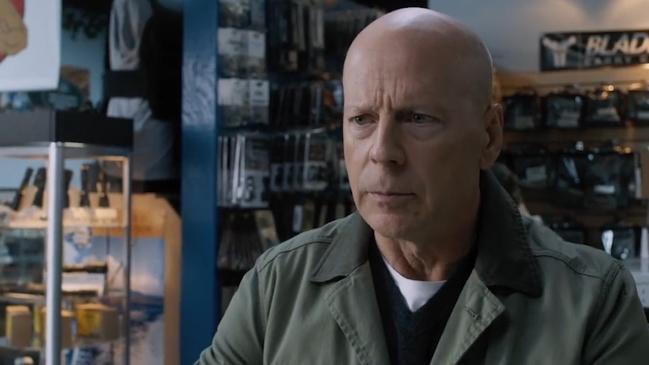 Vincent D’Onofrio’s Frank Kersey is the most interesting character in the movie. He’s Bruce Willis’ brother. D’Onofrio can do no wrong. His character is quite frankly pointless, but D’Onofrio embodies the character with a tinge of slime, that it makes you question if he’s the main villain. I’m not sure if that’s Eli Roth’s doing or D’Onofrio’s — maybe both — but it works.

At times, this movie feels like a joke — Not a satire, as that requires a smartly written script. A joke. “There must be a lot of paperwork?” Paul asks the sales clerk at Jolly Roger’s firearms emporium. “Pfft, don’t worry” she winks. “And as for the safety classes, no one ever fails.” Given the events that unfolded last week in the US, it feels like the worst timing ever to release this movie. And this is coming from someone who welcomes movies that are offensive and pushes buttons. It’s all in the execution.

But even without the political banter, Death Wish is just OK. And OK is better than I expected it to be. The outlandish and humorous action sequences are so much fun and D’Onofrio is engaging throughout. But I can’t help but wonder, what is the fu*king point of this movie?

Death Wish is just OK. The outlandish and humorous action sequences are so much fun and D'Onofrio is engaging throughout. But I can't help but wonder, what is the fu*king point of this movie?